As they did all season long the kids showed up and did battle to the end. We would like to thank the racers and their parents for supporting the Kids program this season and look forward to having everyone back in September when the Kid’s program will resume.

Chase Cook showed his driving ability in the 9 & Under division winning every heat of the race, Evan Neumann drove a steady race earning him a second place finish. In third we had Dylan Wilhelm. 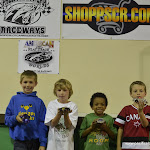 In the 10 – 16 age group the Keehnel brothers started the race with some racing trash talk, it was Renald who would have to eat those words at the end of the night. Dakota won by a Lap after a superb comeback of a 5 lap deficit in the 8th heat. Chase Walton his usual funny self with the third podium place. 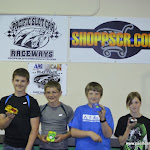