RETRO racing at Pacific Slot Car Raceways happens twice a month, on the second and fourth Saturday of each month. Attendance for these races has continued to grown and the racing has been competitive and fun.

Tom Hansen our resident retro builder has been busy building, tweaking and tuning cars for many of our racers and the results have been impressive! The simple to build JK X25R kit shows great promise and Joe Lim’s Can-Am was the first to make it into the 5.0 lap time during qualifications this past race. Very impressive times by Joe on a car he built himself.

First up was Formula-1, Tom Hansen was Top Qualifier with a 5.177 lap time. Dale Olive set the pace winning the first three heats with Jim Radford’s backup F1. Dale showed his expert knowledge of the Twister track with a car 1/2 second slower than Tom Hansen’s almost forgotten car he revived from his box on race day. Tom Hansen found his stride and took over the lead heats 4 through 6th. In heat 7 Dale took back the lead only to lose it in the last heat to Tom Hansen during heat #8. Tim Burgess took the third podium position from the B Main less than a lap ahead of Jim Radford. Dennis Cook was the most improved driver from the prior race taking 5th place ending 6 laps behind Jim. Leonard Strand drove a consistent 30 lap average race ending 6th. Joe Lim 2 laps behind Leonard. Chris West joined us for his second retro race ever finishing in 8th place. Craig Rieland finished 8th after having car issues during the second heat, he tried to make a comeback furing heat #4 but the repairs failed as Craig spend4 heats in the pits with a DNF. 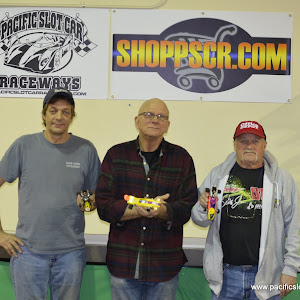 Next up was Can-Am. 4 racers all were in the low 5.0 second times during qualifying with Jim Radford just beating out Tom Hansen with a 5.039 TQ to toms 5.052. With qualifying times so close this was sure to be one of the best races ever. Jim was running a brand new Tom Hansen Built ride with a Hanada Chassis. 10 Laps of tuning and thrown into the fire for some race proving. Dennis cook led the first heat from the B main 3 sections ahead of Jim Radford, From then on Jim Radford led the entire rest of the race winning by less than 5 laps ahead of Tom Hansen. Dennis Cook and Tim Burgess finished in a virtual tie for third place. Joe Lim with his new X25R car finished in 5th place with positions as good as 4th and as bad as 6th Notably only 2 laps behind Tim and Dennis. 1 Lap behind Joe was Dale Olive for 6th Place. Leonard Strand started the race in 9th place slowly getting the feel for the car and finishing 7th, just over 3 laps behind Dale. Gary Johnson finished 8th about 8 laps behind Leonard. Gary was also running a new JK X25R chassis. Craig Rieland finished 9th after a strong start in 3rd place and at one point finishing heat #3 in third overall. Chris West purchased a brand new counter car for race day and after spending a few hours in the morning tuning and practice he wore it out finishing in 10th place. 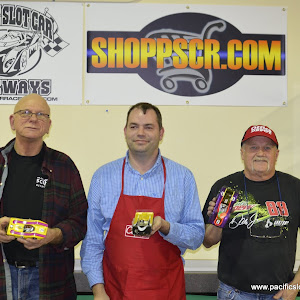 Full race results can be found here, Photos are in our Photo Gallery