Our weekly stock car program has been one of our most successful classes. We race year-round every Friday at 7:00 pm sharp.

In Amateur, Glenn Logan took off and won the first heat just ahead of Gordon Thomas by a few sections. Madison had a rough start and played catchup to Gordon the entire race never quite catching him. Gordon led the race from heat #2 to the end of the race. Mark Kanzler finished the first heat in 6th place working his way through the field finishing in 3rd. All the racers raced hard, The Amateur group is definitely improving week to week. 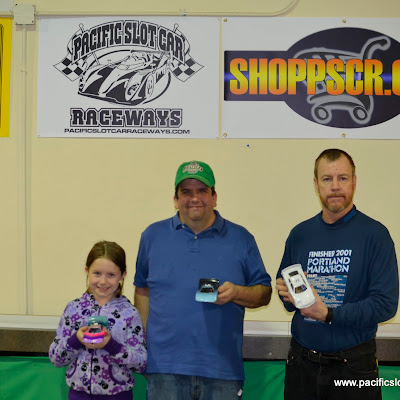 Dale Olive spent some time on Thursday night rebuilding his car prepping it for battle the next day. I knew I was going to have to answer with some improvements of my own or get skunked. So I spent a couple hours on Friday building a new car based on the success I’ve had in the past I basically chose the same design. It was well worth the effort as I set a new lap total record demolishing Olive’s previous record by a whopping 12 sections. Notably absent was Joe Lim although we tried to egg him into coming out and racing several times. I guess Joe just knew he would get beat. TQ Also went to Jim Radford with a 4.782 qualifying lap, nicking the current track record held by Joe at 4.708.

As the start was signaled Jim Radford took the early lead holding it through heat #7 where Dale Olive slipped by temporarily. Aaron Roed drove a very consistent race for the third podium position just a few laps behind Dale. Jim Bowes had a great start but settled into 4th place overall, Tim Burgess had some body issues (At least we could hear him coming) for a 5th place finish. Moving up from the Amateur division was Gordon Thomas in 5th, Dan Hodapp broke a guide in the first heat and finished 7th overall. This was some very close racing 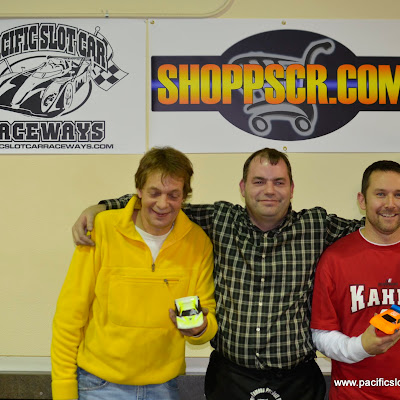 Full expert race results are here. Thanks to everyone for coming out and racing!