This week for the Kids womp races we had a lighter than usual turnout, so instead of racing slot cars we reverted to kids ourselves and held a paper airplane contest. The rules were simple, start with an 8 1/2 x 11 sheet of paper and form it into a paper projectile of your own choosing. The start line was a pit table, winner would be chosen by distance. The budding aerospace engineers (and one real one) went right to work swiftly turning out various shapes and sizes of aeronautical ingenuity. First up was Jim Radford with his Meteor shaped plane with a swift throw nearly making the start finish line of the twister. Up next was Drew Kanzler, his entry falling just a few feet short of Jim’s. Aaron Roed seeing the genius in Jim’s design modified his quickly to match, with a hard throw he neared Drew’s finish falling only a few more feet short. Dale Olive having spent probably the most thought on his design took his throw, it looked like it was going to be the winner when suddenly a wind from the North threw it off track and it landed beyond the drivers panel on the Chief. Last up was Mark Kanzler whos entry fell 20 feet short of the others.

In the end it was Jim Radford 1st, Drew Kanzler 2nd, Aaron Roed 3rd in the most fierce competition Pacific Slot Car Raceways has ever held 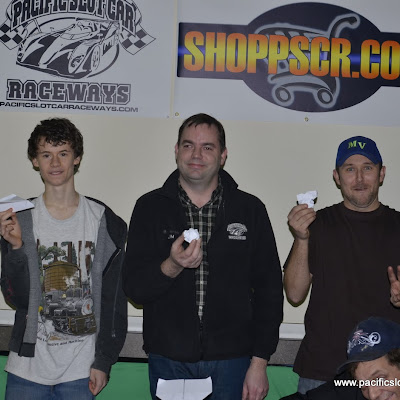 Again congratulations to all the entrants of this close race